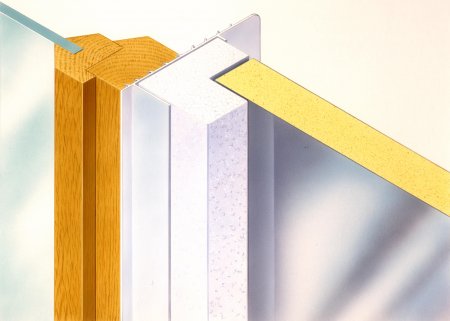 It is unlikely the Government will reduce its commitment to obtaining higher levels of thermal efficiency despite the financial impact of so doing during the current economic climate. Further revisions to Part L of the Building Regulations are expected to regularise the route to compliant construction under the Code for Sustainable Homes. Under the SAP calculations and Part L requirements the designer and the developer are charged with undertaking compliancy assessments.

One such aim is to reduce the amount of thermal bridging to achieve a low Y Value. At the same time the specification of insulations deployed must be considered together with the air tightness of the building. The most commonplace area of thermal bridging is around window and door openings. These literally punctuate the cavity wall at all levels and so doing creates opportunities for thermal bridging at the reveals.

Often overlooked is the extent by which an exterior skin material will worsen the heat loss path (and so challenge the intended thermal wellbeing around an opening) whenever the masonry skin becomes saturated with water. The conductivity of a brick does not improve when wet, quite the contrary.  But how often is this taken into account when considering the overall performance of the structure? Can a reveal detail that marginally complies with SAP / Part L requirements remain compliant when the structure is wet?

The thermal conductivity of any material depends on temperature, density and importantly its moisture content. When a material becomes wet, the air enclosures fill with water and the conductivity of the material increases because water is a better conductor than air.

The same brick when wet can have a thermal conductivity of 0.9 – 1.2 W/mK.  An increase in conductivity of up to 50%. This should be borne in mind when calculating any heat loss path given the proximity of a wet outside skin with the reveal closing arrangement.

1) Use a cavicloser that permits variable frame positions rather than just a fixed one. Moving the frame further back within the reveal within the permitted parameters can shorten the heat-loss path through the exterior skin and lengthen the path through the interior skin. Check whether this might benefit your openings.

2) Instead of using an ordinary cavity closer consider using a Continuity Closer. Continuity Closers link with the cavity insulation and so block the commonplace gaps that occur and provide heat-loss paths. A Continuity Closer can cost no more yet can raise the performance compared with a non-interfacing alternative.

(Gaps contravene Approved Document L1A 5.9 that states the building fabric should be constructed so that there are no reasonably avoidable thermal bridges in the insulation layers caused by gaps and refers to those at the edges of elements such as around windows and doors).

3) Ensure any penetrating water arrested by a cavity tray, lintel or dpc is quickly evacuated from the structure and not retained within it. The more quickly the masonry dries out the more quickly the thermal performance improves. Caviweeps provide water exit routes – select from the various models available. Some are dual-function and can function despite directly-blowing wind pressure.

4) Opening heads and opening sills can receive insulation infill’s that  reduce heat loss. Compressible Cavistops are ready-shaped to suit the area into which they are fitted and provide acoustic and thermal qualities. They take just seconds to install and friction-fit.

Always review the calculated performance of any opening through a cavity wall and how it might change when the exterior skin masonry becomes saturated.