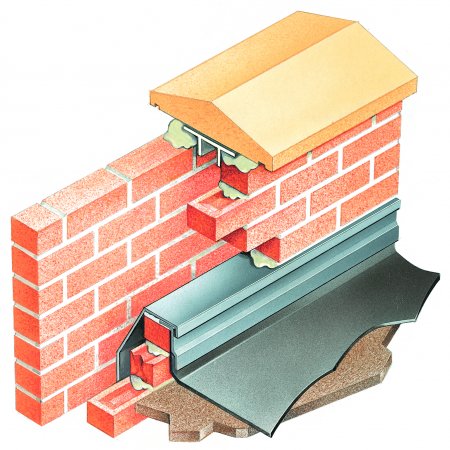 Parapet cavity walls behave differently because both faces are exposed. Such dual exposure dictates the protection against damp penetration takes into consideration more variable elements than are normally encountered. And if the parapet is curved, the behaviour of the masonry itself can be more problematic if certain aspects are ignored.

When a traditionally constructed parapet wall becomes saturated with rain and in extremes of heat and cold, expansion of the masonry can prejudice the masonry structural continuity. When this occurs the DPC bedding course in a parapet offers the least line of resistance and acts as a slip-plane, so movement at DPC level in the outer and inner skins is commonly witnessed.  Where the amount of expansion is not fully compensated by contraction, progressive movement over the years will occur as a result of ratcheting.  (Where the expansion movement is not fully matched by the retraction movement and masonry above the DPC progressively moves out of alignment). This is identified initially by witness lines and eventually by horizontal cracking along the courses in which the parapet DPC has been supported.

Curved parapets can accentuate the problem especially if the curve is between two resilient structural points. Thrust direction can then move at 90º to the arc and a radius eyebrow ledge can result. Such movement is commonly accompanied with coping dislodgement where coping pinching occurs.

The British Standard detail depicts an outward stepping dpc supported in both the inner and outer skins of the parapet wall. This results in the entire parapet masonry above the DPC being separated from the masonry below the DPC. It is not the ideal structural arrangement for a highly exposed wall at the top of a building.

However, by using a preformed Type P parapet cavitray that is self-supporting and requires building into one skin only, the outward stepping profile is achieved but the opposite masonry skin can remain continuously bonded and uninterrupted. Consequently the solidity and structural integrity of the parapet wall build as a whole is considerably improved.

As with any wall, in long runs and especially when constructing a curved parapet, expansion provision is necessary in the form of expansion joints.

Interestingly if one looks back at earlier British Standards an inward stepping DPC crossing the cavity was stipulated rather than an outward stepping DPC. Initially parapet walls built to that detail functioned correctly but after a few years cracking along the bedding course provided an entry route for penetrating water to enter.

The water could then track inwardly on the underside of that inward stepping DPC.  As soon as the tracking water reached the inner skin, the damp problem became visible.

Our approach was the opposite. We designed an outward stepping arrangement - the concept subsequently to appear within the revised British Standard.  However, by further developing our Type P Cavitray so it builds into one skin only, we improve structural integrity and minimize cracking opportunities. The right parapet specification ensures a correctly protected construction and one in which the structural continuity is enhanced and the protective tray arrangement supports independently and steps outwardly.

PD 6697: 2010 states ‘While a cavity tray may direct water towards the inner or outer face, when cavity insulation is installed, the tray should always slope or step towards the outer leaf’.

We believe this notion to be misleading and have reported our concern.

The presence of cavity insulation does not remove a parapets receptiveness to crack along the DPC support beds and admit water.

Never inwardly regardless of the cavity fill status.