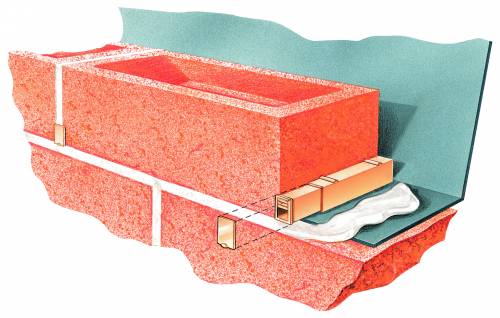 Designers accept that cement rendered surfaces of exterior skins will eventually develop cracks and fissures, irrespective of the render formulation. Accordingly provision should be made to manage the consequence of having cracks and fissures present within exterior rendering during the lifetime of the structure.

Initially a high alkaline sand and cement rendered surface will shrink. The immediate telltale signs are usually detectable at junctions with window and doorframes. On a daily basis expansion and contraction will also occur, accompanied by a range of temperature fluctuations. To this are added seasonal rain and wind, the combination of which will penetrate the render coat and the masonry skin supporting the render.

Sand and cement rendered surfaces form part of the building substrate once they have cured and are usually finished with a decorative paint that offers waterproof or water repellent qualities. Conventional paints are classified as low film and are reliant on adhesion to the surface to which they are applied. Thus when the render cracks so does the paint – providing opportunities for water ingress. So whilst the paint film will act as a raincoat over the render, cracks within the film or at its junctions with frames etc can be subjected to considerable water wash running from the surface of the adjacent unbroken film.

When water that penetrates a rendered surface it can promote four major deficiencies:

1)       Despite being fully rendered and painted, film detachment and film ballooning can occur.

2)       Regardless of the render finish, where water pools within dpc’s trays and lintels and cannot escape, damp banding and patching will be visible. Shown here in unpainted render.

3)       Wet substrate and any substrate affected by internal pooling will deteriorate when freezing temperatures are experienced. Spalling will commonly eventually follow.

4)       Portland cement materials are susceptible to attack from soluble sulphates within walls where water is prevented from evacuating and the masonry skin cannot dry out.

There are now discreet caviweeps that are barely visible once installed. They remain in place ready to function whenever volumes permeate the structure. They provide a passive means of escape that is always in place – from when a masonry skin is new and thereafter. Thus the serviceable life of a rendered wall can be extended rather than curtailed by making provision to manage the consequence of having cracks and fissures present within it - and its exterior rendering where present.

Render deterioration will occur -  it is only a question of when it will occur, It is incorrect to assume a rendered wall is impervious to water penetration during its lifetime.

Further information may be found within Product Guide Volume 21.