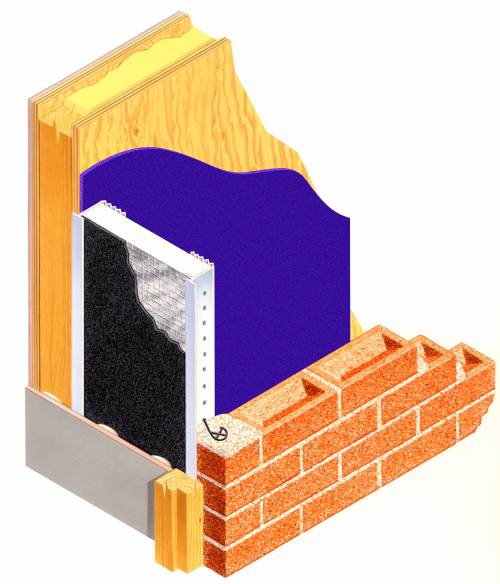 Improved Thermal Efficiency for Cavity Widths up to 330mm

All WCA models (Wide Cavity Applications) close the reveal, act as a vertical dpc and provide thermal zoning between skins.

The main  body of the WCA Maxi closer is triple-layered.

It consists of a robust 50mm insulating foam core over layered on three sides with a reflective foil on a bubble barrier with a finishing face of heavy duty low conductivity petheleyne.

These are the first multi-layered caviclosers for very wide cavities available in the United Kingdom.

Cavity widths up the 330mm accommodated.

Initially available to suit cavity widths up to 330mm, the WCA Maxi range is suitable for use in both traditional and timber frame construction.

The closer may be built in as walls are raised or alternatively introduced at second-fix stage in the build programme.

To secure the closer in place two options are offered:

Rather than being moulded together, the Maxi range sides are independent of each other, being friction linked via the insulating core.

This arrangement is more accommodating and recognizes that any axis of movement between the outer and inner skins is more pronounced as the distance between skins becomes greater.

(The co-efficient of expansion of some skin types (such as timber) varies considerably compared with conventional masonry).

The Type WCA Maxi range may be used to close straight and checked reveals within cavity walls.

For straight reveals the closer is supplied with projecting sections to overlay both inner and outer skins.

For checked reveals the closer is supplied with one of the projecting sections (that normally overlays the outer skin masonry) removed, permitting the closer to terminate against the inner face of that outer skin.

Always specify clearly the type of reveal you are constructing.